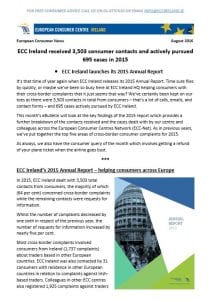 It’s that time of year again when ECC Ireland releases its 2015 Annual Report. Time sure flies by quickly, or maybe we’ve been so busy here at ECC Ireland HQ helping consumers with their cross-border complaints that it just seems that way? We’ve certainly been kept on our toes as there were 3,503 contacts in total from consumers – that’s a lot of calls, emails, and contact forms – and 695 cases actively pursued by ECC Ireland.

This month’s eBulletin will look at the key findings of the 2015 report which provides a further breakdown of the contacts received and the cases dealt with by our centre and colleagues across the European Consumer Centres Network (ECC-Net). As in previous years, we’ve put together the top five areas of cross-border consumer complaints for 2015.

As always, we also have the consumer query of the month which involves getting a refund of your plane ticket when the airline goes bust.

To find out more read on below or download your free copy of the August 2016 eBulletin here.

In 2015, ECC Ireland dealt with 3,503 total contacts from consumers, the majority of which (64 per cent) concerned cross-border complaints while the remaining contacts were requests for information. 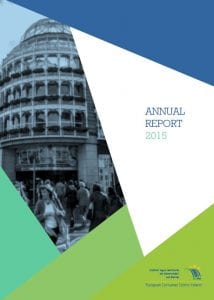 The overall number of cross-border consumer complaints actively pursued by ECC Ireland and requiring the further assistance of the European Consumer Centres Network (ECC-Net) came to 695. Of these, 232 cases involved Irish consumers against traders based in other European countries while 463 cases related to complaints by consumers from other European countries against traders based in Ireland.

As in previous years, the 2015 Annual Report provides a further breakdown of the cross-border consumer complaints actively pursued by ECC Ireland thereby revealing what were the most common issues faced by consumers in Ireland and elsewhere in Europe. 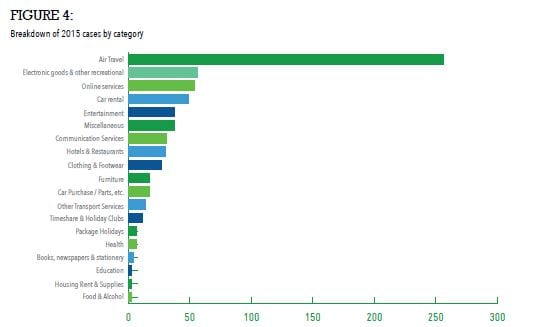 Breakdown of 2015 cases by category

During 2015, ECC Ireland continued its work on the promotion of Alternative Dispute Resolution (ADR) in Ireland. In October, we hosted a major seminar on this topic, together with the Law Society of Ireland, which was opened by Isolde Goggin, chairperson of the Competition and Consumer Protection Commission (CCPC) and attended by more than 200 stakeholders from the legal profession, ADR entities, and consumer policy representatives. 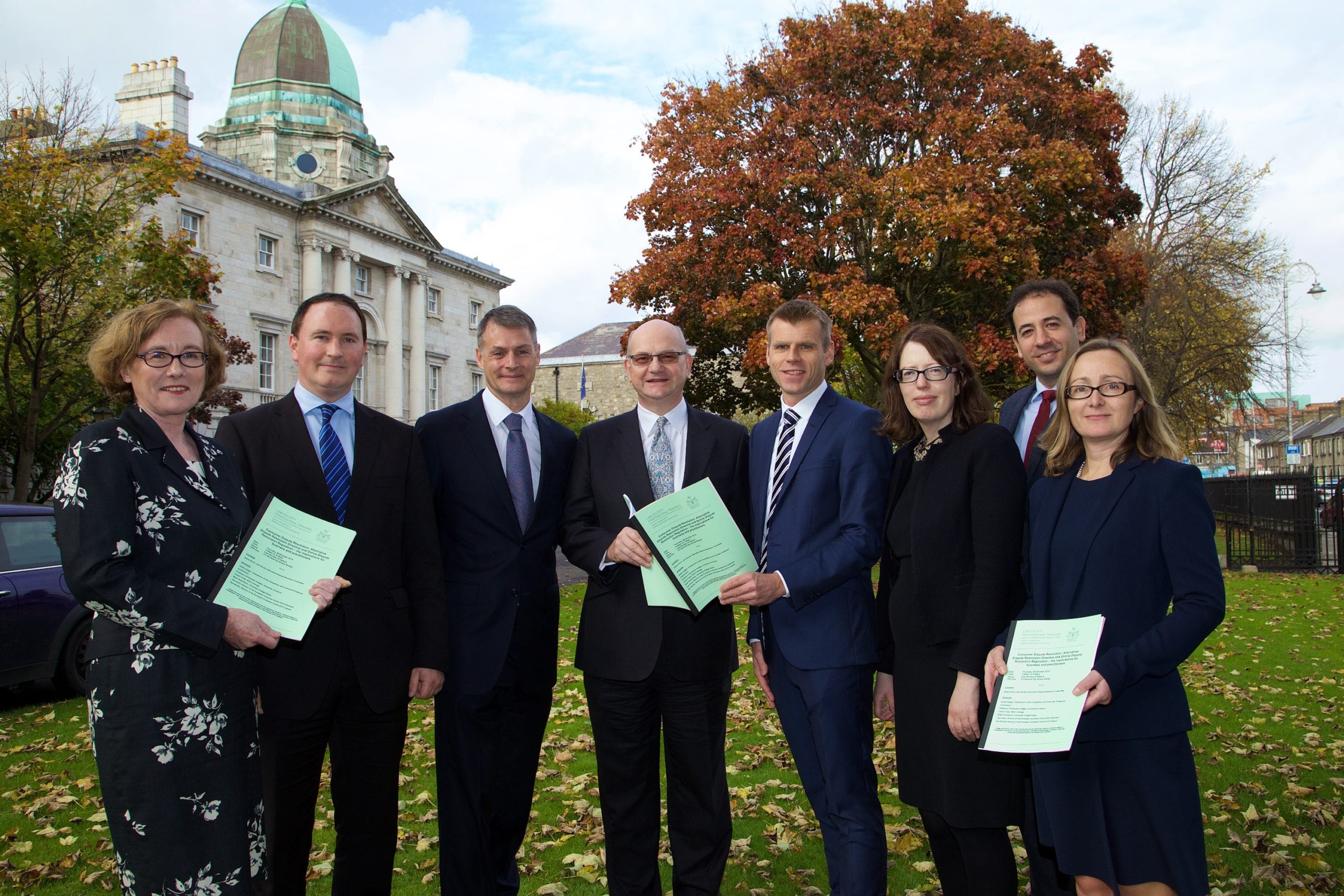 ECC Ireland met with a number of other organisations in order to further develop cooperation and to improve services and information provision to consumers and traders. Organisations we met with include the Competition and Consumer Protection Commission (CCPC), the Enterprise Europe Network (EEN), the Department of Jobs, Enterprise, and Innovation, the Consumer Council of Northern Ireland, the European Commission Representation in Ireland, the Europe Direct Network, and the European Movement. We also played an active role in European Consumer Centres Network (ECC-Net), attending network meetings and participating fully in the role of the ECC-Net.

It was also a busy year for media and outreach activities with 151 media interviews/mentions provided across all media channels. ECC Ireland promoted and provided consumers with information on a range of subjects and events including safer online shopping, the 10th anniversary of ECC-Net, membership subscriptions, supposed ‘free trials’, air passenger rights, and many more.

Around 57 per cent of the media coverage in 2015 was generated from the 11 press releases issued to the media. Other mentions came about through responding to media queries, EC Radio Ireland news wire service, and other communication tools such as the monthly eBulletin. The 2015 media coverage includes the following:

Providing consumers with easier access to information via ECC Ireland’s website was also a priority during 2015 with considerable work done on mobile responsiveness, accessibility, and search engine optimisation. New approaches and updates were applied to ECC Ireland’s Twitter account, eBulletin, and other communication tools.

If you want to find out more, then download ECC Ireland’s 2015 Annual Report here.

Question: I booked flights with VLM to fly from Waterford to London Luton in August. On June 6th last, however, I received an email stating that the flight had been cancelled as the airline could no longer operate the route this summer, “due to the ongoing lack of crew availability”. They stated that ‘customers having booked via flyvlm.com or call centre will be refunded directly by VLM to the credit card used in the booking process.’ Three weeks have already elapsed and still no sign of any refund. I understand that the airline has since gone bankrupt. What can I do?

Answer: We understand that although Belgian airline VLM announced on June 4th last that its route Waterford to London Luton would be discontinued from June 16th, services were effectively terminated from June 8th as a break in services from that date had been previously arranged. The airline had applied to the Antwerp commercial court on May 13th last for bankruptcy protection and on June 22nd the airline declared bankruptcy, cancelling all operations and shutting down its website.

Although the airline advised that customers who had booked their flights directly on the airline’s own website or via their call centre would be refunded through the card used to make the reservation, we would suggest requesting chargeback from your card issuer company/bank, given the airline’s limited ability to operate at present. Please note that unsecured creditors, such as consumers, are typically quite far down on the list of creditors in the event of insolvency or liquidation. Should further assistance be required our office may seek additional information from our Belgian counterparts as to the status of the bankruptcy procedure.