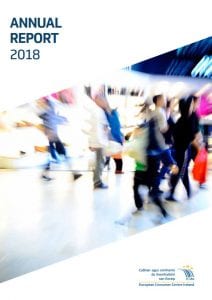 Dublin, 10th September 2019 – The European Consumer Centre (ECC) Ireland has today published its Annual Report for 2018, which shows that air travel continues to be the most complained about cross-border consumer issue. Other sectors to feature in the top five areas of complaint are car rental, electronic products, hotels and accommodation and furniture.

In 2018, ECC Ireland dealt with a total of 4,052 contacts from consumers, of which 1,300 (32.1 per cent) were requests for information while the remainder, 2,752 (67.9 per cent), were cross-border complaints (the highest number of such complaints lodged with ECC Ireland since the service began 20 years ago). Many of these complaints (58.9 per cent) were from Irish consumers about traders based in other EU/EEA countries. It was a record year for the overall number of cross-border complaints actively pursued by ECC Ireland on behalf of consumers; the total came to 1,397 cases representing an increase of 35.5 per cent on 2017 and having doubled in the three years since 2015.

ECC Ireland spokesperson, Martina Nee, said: ‘Having more knowledge about consumer rights and how to avail of them can go a long way in empowering consumers. And so, most consumers who contact the European Consumer Centres Network (ECC-Net) for advice are subsequently able to resolve disputes themselves directly with traders. However, there are instances where further assistance is required.

Last year, there were 266 cases actively pursued by ECC Ireland on behalf of Irish consumers who had disputes with traders based elsewhere in Europe. We also assisted consumers based in other EU/EEA countries by liaising on their behalf with Irish based traders to resolve 1,131 complaints reported to our ECC-Net colleagues.

With 886 cases, air passenger rights was once again the biggest area of complaint in 2018. This category has held the top spot year-after-year. Another area of complaint causing problems for consumers is car rental with 105 cases. This was followed by electronic products (91 cases), hotels and accommodation (63 cases), and furniture (54 cases).’

Download the full ECC Ireland Annual Report 2018 for more information including case studies for each category.

ECC Ireland is part of the European Consumer Centres Network (ECC-Net), which covers 30 countries (all EU countries plus Norway and Iceland), and offers a free and confidential information and advice service to the public on their rights as consumers, assisting consumers with cross-border disputes. ECC Ireland is co-financed by the European Commission and the Competition and Consumer Protection Commission.