There are several perks to renting a car when on holiday, and top of that list is the freedom to go where you want, when you want. However, while there are many pros there can also be cons for some unlucky consumers. To help you navigate potential car rental potholes, this month’s bulletin will look at the problems that can, and do, occur as well as tips on what to do before hiring a car, collection, during the rental, and returning the vehicle. 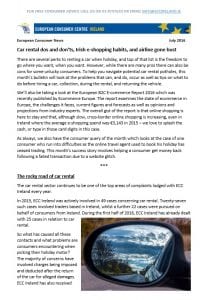 We’ll also be taking a look at the European B2C E-commerce Report 2016 which was recently published by Ecommerce Europe. The report examines the state of ecommerce in Europe, the challenges it faces, current figures and forecasts as well as opinions and projections from industry experts. The overall gist of the report is that online shopping is here to stay and that, although slow, cross-border online shopping is increasing, even in Ireland where the average e-shopping spend was €3,143 in 2015 – we love to splash the cash, or type in those card digits in this case.

As always, we also have the consumer query of the month which looks at the case of one consumer who ran into difficulties as the online travel agent used to book his holiday had ceased trading. This month’s success story involves helping a consumer get money back following a failed transaction due to a website glitch.

You can download a PDF of the July 2016 eBulletin or continue on reading below.

The rocky road of car rental

The car rental sector continues to be one of the top areas of complaints lodged with ECC Ireland every year.

In 2015, ECC Ireland was actively involved in 49 cases concerning car rental. Twenty-seven such cases involved traders based in Ireland, whilst a further 22 cases were pursued on behalf of consumers from Ireland. During the first half of 2016, ECC Ireland has already dealt with 25 cases in relation to car rental. 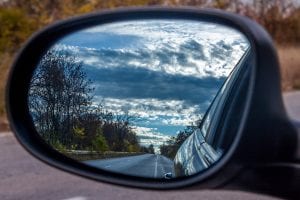 So what has caused all these contacts and what problems are consumers encountering when picking their holiday motor? The majority of concerns have involved charges being imposed and deducted after the return of the car for alleged damages. ECC Ireland has also received complaints in relation to the terms and conditions set out by the car rental providers (for example, administration fees imposed by car hire companies to process damage claims, traffic fines, re-fuelling or additional cleaning).

In 2015, there was a lot of complaints in relation to insurance products; consumers claimed that they had been pressurised at the rental location to buy expensive insurance products in addition to compulsory covers or that those products were added to the rental without their knowledge. Obtaining redress in relation to these types of cases can be difficult as car rental companies can usually produce a copy of the car rental agreement with the consumer’s signature.

At present, there is no industry specific legislation relating to car rental companies. However, consumers are protected by other instruments which have a more general scope – Directive 93/13/ECC on Unfair Terms in Consumer contracts and Directive 2005/29/EC on Unfair Commercial Practices.

In 2015, five major car rental companies agreed to significantly review how they deal with consumers thanks to a joint action from the European Commission and national enforcement authorities based on complaints received by ECC-Net.

Before hiring a vehicle:

Collection of the vehicle: 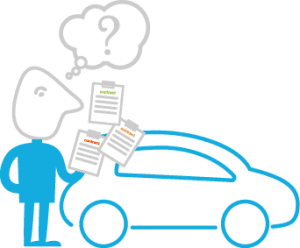 When you return home:

Hopefully, now that you’re armed with these tips you won’t have any problems and get to be king of the open road, enjoy your holiday, and have no fuss when you return the car and get home. However, if you do, you know where we are! 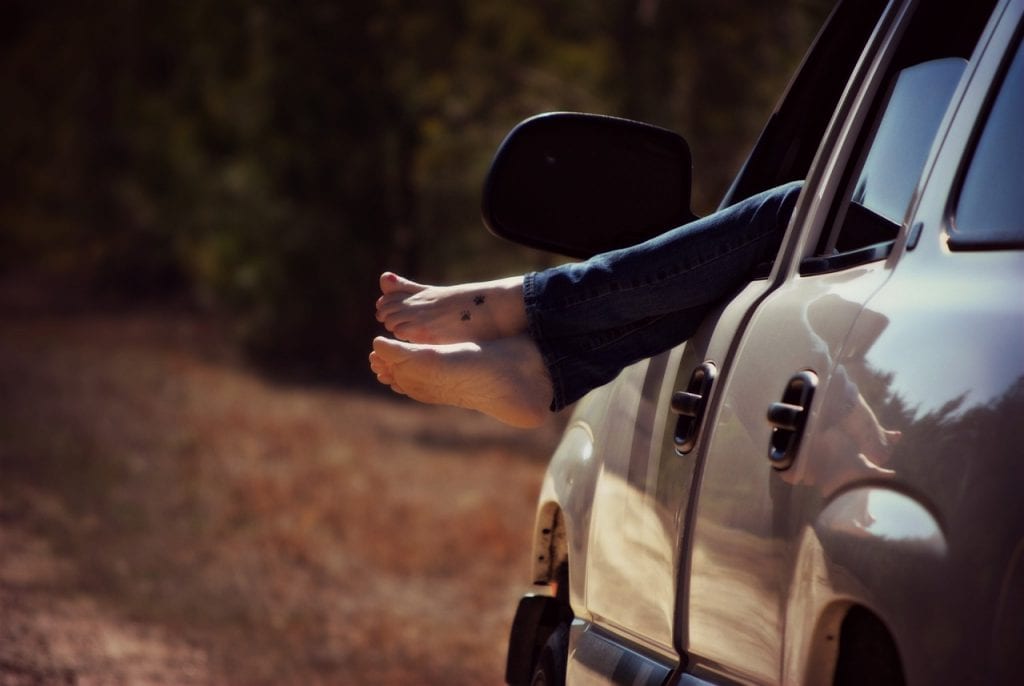 The European B2C E-commerce Report 2016, which was published recently by the Ecommerce Europe, has found that the “digital sector is booming” with online retail continuing to grow significantly. However, while European e-commerce turnover increased 13.3% to €455.3 billion in 2015 the full potential of the European e-commerce market has not yet been reached. 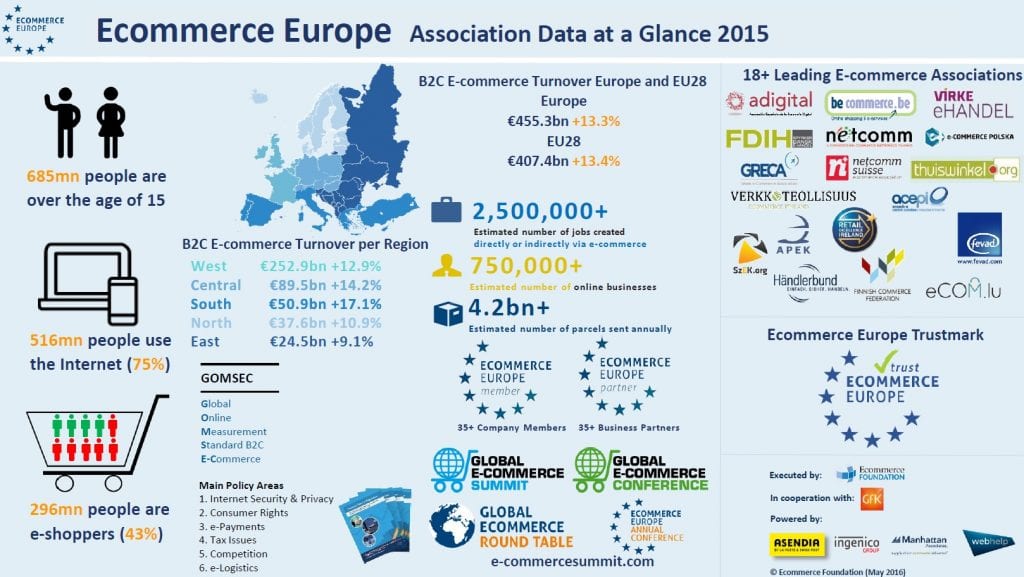 Currently, 57 per cent of European internet users shop online but only 16 per cent of SMEs sell online, and less than half of those sell online across borders (7.5 per cent). In 2015, 16 per cent of all individuals in the EU28 purchased goods and/or services online from sellers based in another EU country. This is an increase of 33 per cent from 2013 figures. In Ireland, cross-border online shopping increased from 24 per cent in 2013 to 30 per cent in 2015. It’s that although the full potential of ecommerce has not yet been realised we are inching closer with cross-border online shopping increasing gradually year-after-year. The total online sale of goods and services in Europe is forecasted to grow to around €509.9 billion by end of 2016. 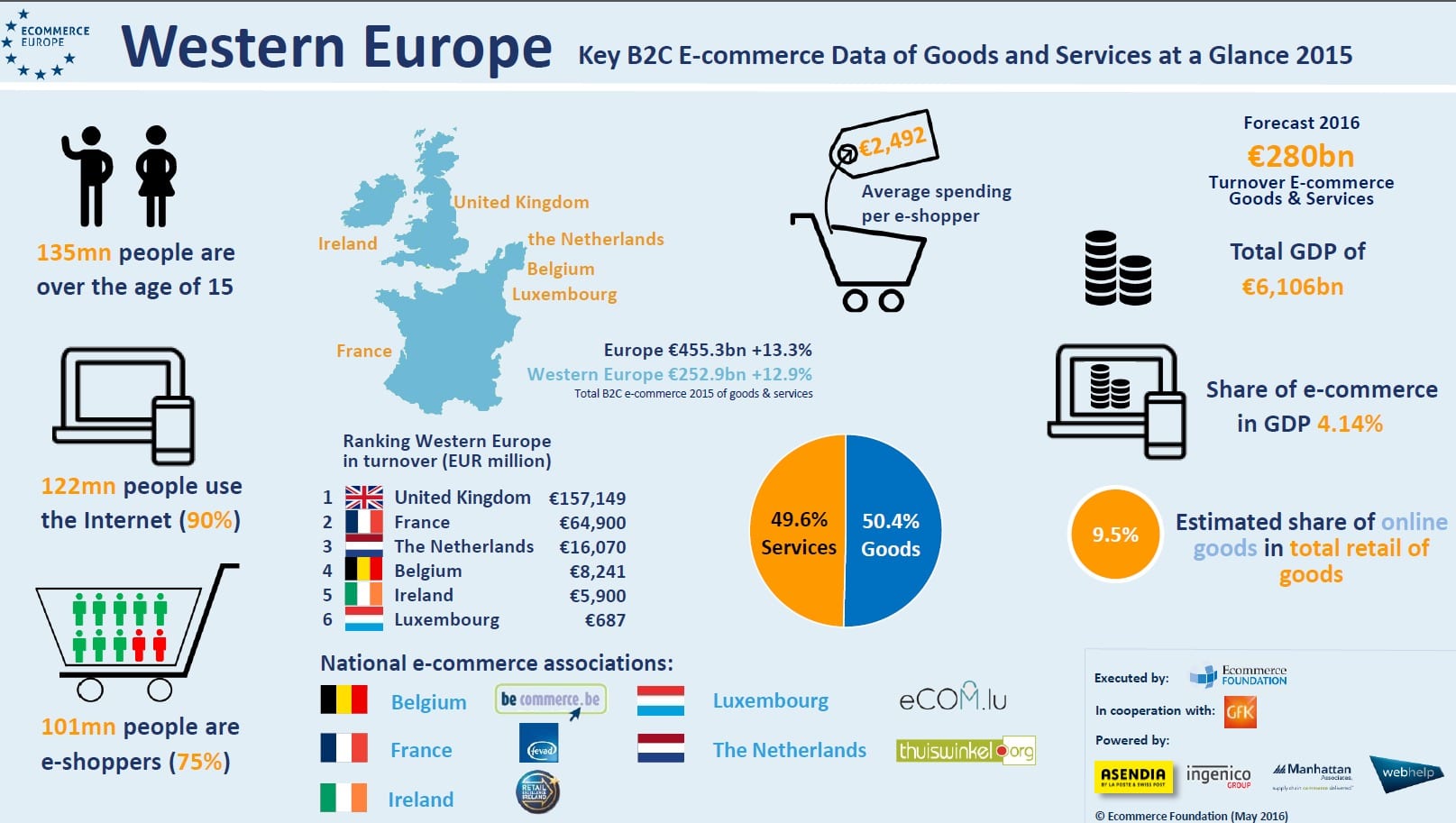 A closer look at Ireland shows that there were 3 million (82 per cent of the total population) using the internet in 2015 and 1.9 million (52 per cent) were e-shoppers. The average spend per e-shopper in Ireland increased to €3,143 in 2015. 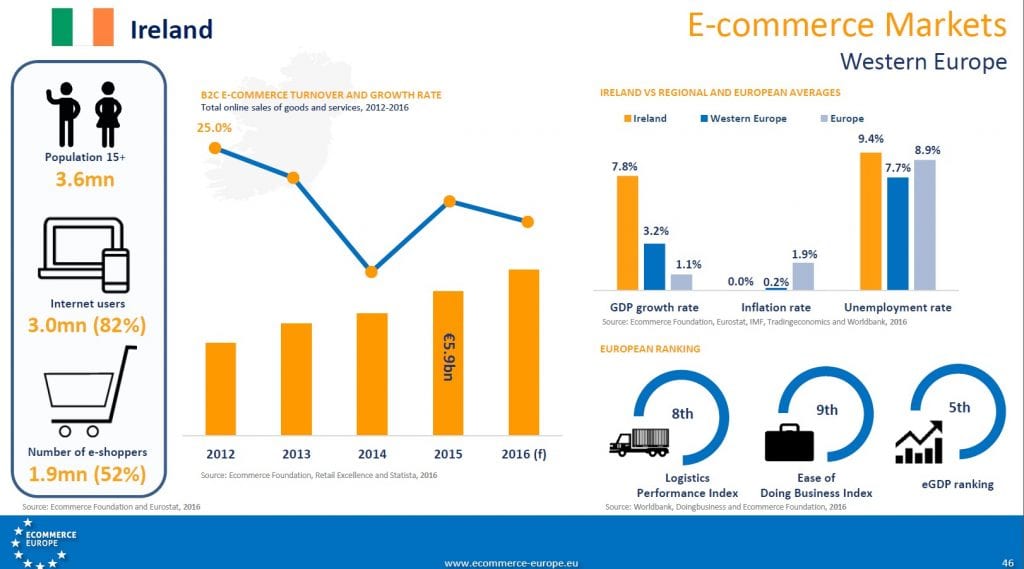 The top five products bought by Irish consumers were clothing followed by media and entertainment, information technology, shoes and lifestyle, and home and garden. When it came to services paid for online flight tickets and accommodation was the most popular with an estimated sale of €1,515 million (+16.6 per cent), followed by package travel with a sale of €685 million (+20.2 per cent), insurance sales came to €499 million (+20 per cent), event tickets sales were €226 million (+17.3 per cent), and for other services an estimated €24 million was spent (+9.8 per cent). 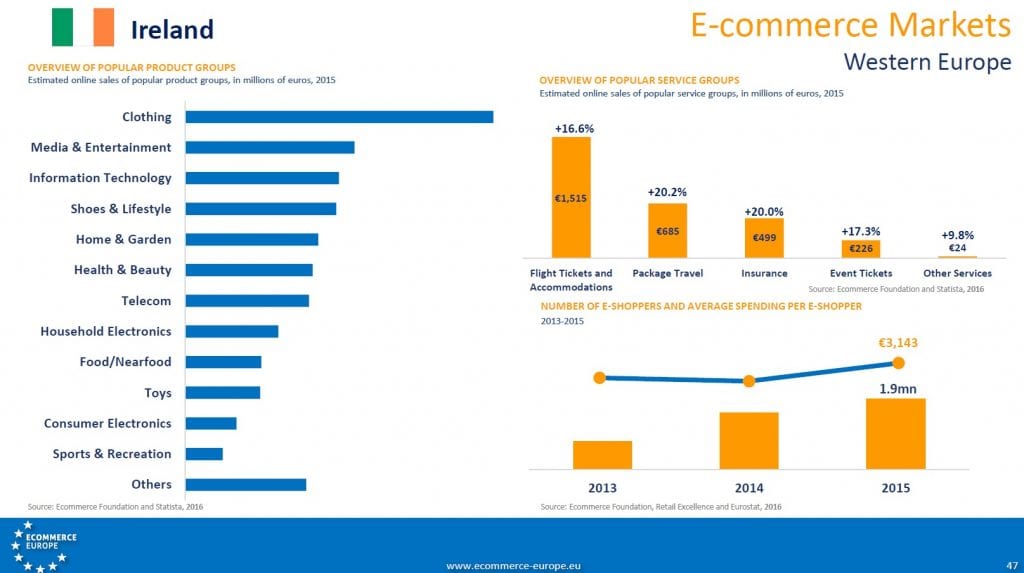 Find out more about the current state of e-commerce in Europe by downloading the European B2C E-commerce Report 2016.

Answer: In Ireland, travel agents and tour operators selling packages originating in the Republic of Ireland are required to be licensed by and bonded with the Commission for Aviation Regulation (CAR) to protect consumers in the event of the company going bust. Because of this Irish consumers should address their consumer complaints regarding Lowcostholidays with CAR.

Consumers who have booked a package that does not include the travel departing from the Republic of Ireland or accommodation only with Lowcostholidays are not covered by the Commission for Aviation Regulation’s bond and should instead pursue their complaints through a chargeback request with their credit or debit card provider, or travel insurer, if their cover includes financial failure of the travel organiser.

A consumer from Ireland placed an order on the website of a trader from the UK. Due to a glitch on trader’s website, no order number was generated after authorising the payment of €385. No email confirmation was received either and the goods ordered were not delivered. The consumer’s card, however, was charged the full amount. The consumer tried to resolve the issue by contacting the trader but the latter was unable to trace the transaction. In light of the situation, the consumer contacted ECC Ireland for assistance. The trader was subsequently contacted through the local Trading Standards office and the trader agreed to reimburse the €385 without further delay.