The summer holidays are well and truly in full swing. If you’re yet to jet off to somewhere sunny, discover a new city, or about to go on a new adventure, then it might be wise to first take the time to familiarise yourself with consumer rights when travelling abroad and our summer holiday tips. 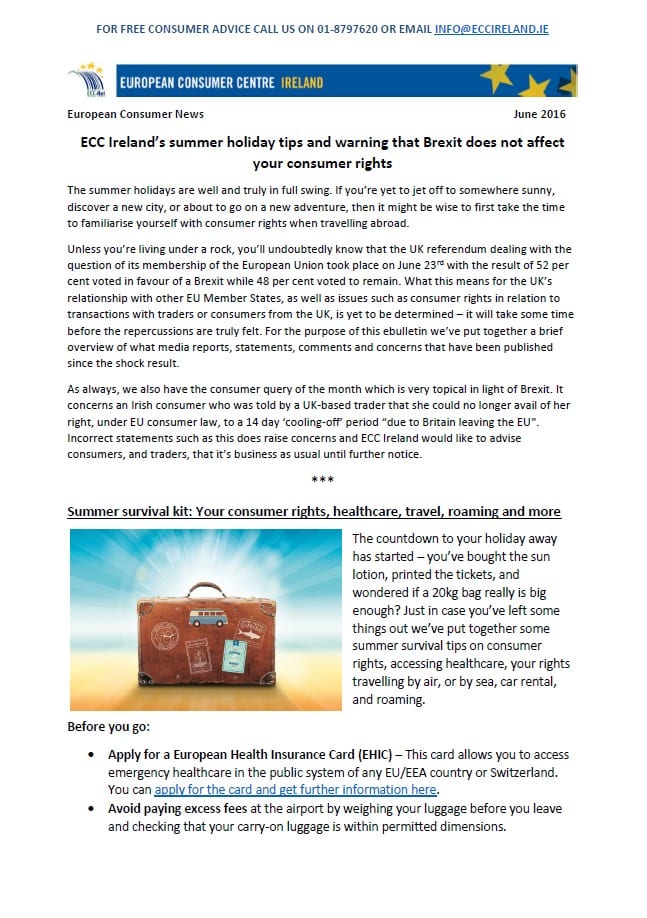 Unless you’re living under a rock, you’ll undoubtedly know that the UK referendum dealing with the question of its membership of the European Union took place on June 23rd with the result of 52 per cent voted in favour of a Brexit while 48 per cent voted to remain. What this means for the UK’s relationship with other EU Member States, as well as issues such as consumer rights in relation to transactions with traders or consumers from the UK, is yet to be determined – it will take some time before the repercussions are truly felt. For the purpose of this ebulletin we’ve put together a brief overview of what media reports, statements, comments and concerns that have been published since the shock result.

As always, we also have the consumer query of the month which is very topical in light of Brexit. It concerns an Irish consumer who was told by a UK-based trader that she could no longer avail of her right, under EU consumer law, to a 14 day ‘cooling-off’ period “due to Britain leaving the EU”. Incorrect statements such as this does raise concerns and ECC Ireland would like to advise consumers, and traders, that it’s business as usual until further notice.

You can download a PDF of the June 2016 eBulletin or continue on reading below.

The countdown to your holiday away has started – you’ve bought the sun lotion, printed the tickets, and wondered if a 20kg bag really is big enough? Just in case you’ve left some things out we’ve put together some summer survival tips on consumer rights, accessing healthcare, your rights travelling by air, or by sea, car rental, and roaming.

Before you go on holidays:

The guessing game – what does Brexit means for UK, Ireland, EU and consumers?

On June 23rd last UK voters went to the polling stations to make the important decision on membership of the European Union. Despite initial indications that the remain campaign might just scrape by it was the leave supporters who won out in the end with 17,410,742 (52 per cent) voting for leave the EU compared to the 16,141,241 voters who voted to stay.

This shock result has prompted a lot of discussion, speculation, and a lot of concern about what this will mean for the UK, for Ireland, and the rest of the European Union. The short term effect so far has been the resignation of UK Prime Minister David Cameron, Sterling falling to a 31-year low and a 57% rise in hate crime, Scotland and Northern Ireland’s pleas to remain in the EU and calls by the former for a referendum on independence and a border poll for the latter. There are also concerns for how the Ireland will be impacted by Brexit, what the Irish Government can do to cushion the blow, and if border controls will once again divide the Republic and Northern Ireland.

So what is the long-term impact? Taking into account the fact that UK is Ireland’s biggest trading partner, and that the majority of cross-border purchases of goods and services by Irish consumers are from UK traders, Brexit will certainly bring about some change. What kind of change? Well, to be honest, there’s nothing concrete on that yet. Any change that does occur will take some time. The UK has to first notify its decision to withdraw from the EU under Article 50 of the Lisbon Treaty to begin the divorce process which may take up to two years. A shorter period may be agreed upon but, likewise, the two-year limit could be extended. Of course there will be endless negotiations on trade and other issues that may impact our future relationship.

In a joint statement by Martin Schulz, President of the European Parliament, Donald Tusk, President of the European Council, Mark Rutte, holder of the Presidency of the Council of the EU, and Jean-Claude Juncker, President of the European Commission, the UK government were called upon to “give effect to this decision of the British people as soon as possible, however painful the process may be”. This was supported by EU Commissioner for Agriculture and Rural Development Phil Hogan who said: “I regret but respect the decision of the British people to leave the European Union. I echo the call of President Juncker for a swift and decision negotiation, pursuant to Article 50, in the interests of both sides. It’s essential that we set in train the essential steps to bring clarity and stability to the 27 member bloc as quickly as possible”.

Commentators have said that Brexit could affect EU legislation on roaming charges with Irish consumers living in the border counties or travelling temporarily in Northern Ireland and the rest of the UK being hit by large bills. It has been suggested that due to the fall in Sterling it could be cheaper to buy goods such as clothes in the UK, however that’s no consolation this also raises the costs for retailers who rely on imports from other markets as this may lead to inflation. Also, if you fall ill there is no guarantee, yet, that the European Health Insurance Card (EHIC) scheme will apply in the UK. At present the scheme is available in EU and EFTA countries. The same is true for various networks of national enforcement bodies (NEBs) operating under EU law, such as the NEBs of Regulation 261/2004 in relation to flight cancellations, delays, and denied boarding. Procedures such as the European Order of Payment and the European Small Claims Procedure may also be discounted in the UK and there could be an impact on the development of online dispute resolution (ODR). Concerns similarly exist around issues such as consumer protection cooperation and data protection.

The EU Policy broadcaster viEUws interviewed Janis Emmanouilidis (Director of Studies at the Brussels-based think tank European Policy Centre, who discussed the UK referendum outcome and how he thinks it impact the EU and future negotiations (view video below). Hear what he has to say on the matter.

Another video (below), published by viEUws, shows Christofer Fjellner, EPP member of the International Trade Committee in the European Parliament, discussing the consequences of the UK referendum and the potential Brexit for the EU trade policy.

At present there are many uncertainties because of Brexit, but what is clear is that if Irish consumers buy goods or services from a UK-based trader, and vice-versa, consumer rights under EU legislation have not suddenly changed.

Whether you buy something in person or online from a UK trader you enjoy the same rights today as you did before the June 23rd referendum. ECC Ireland has received a report (see consumer query of the month) of a UK trader claiming that EU consumer legislation, such as the right to a 14 calendar day ‘cooling-off’ period, is no longer applicable because of Brexit.

ECC Ireland would like to advise consumers that this is not correct, your rights under EU consumer law still applies in the UK and other EU Member States, and do not let Brexit be used as an attempt to deter you from availing of those rights.

See our information on buying goods and services in the EU, shopping online, and air passenger rights.

Question: I bought a dress from a UK-based trader. Unfortunately, when the dress arrived it didn’t fit properly so I contacted the trader to avail of the 14 day ‘cooling-off’ period. However, I was told that I could not be given a refund for the dress due to Britain leaving the European Union and that EU consumer law would no longer apply in Britain as a result. Is this true? What are my rights?

Answer: The information provided by the trader on this occasion is incorrect. The ‘cooling-off’ period is the means by which consumers within the EU/EEA can withdraw from a distance contract within 14 calendar days from the time of delivery. Regardless of changes to UK legislation that may be introduced in future, at present EU law, as transposed into UK legislation, continues to apply. The 14-day ‘cooling-off’ period referred to, for instance, was indeed introduced by virtue of the EU Consumer Rights Directive, which has subsequently been transposed into national legislation by all the Member States, including the UK. In particular, Regulation 29 of the UK Consumer Contracts (Information, Cancellation and Additional Charges) Regulations 2013 (S.I. 2013 No. 3134) set out the right to cancel a distance contract within 14 days. This time limit can be extended, under Regulation 31, in the event of breach of information by the trader. These UK regulations came into force on 13th June 2014 and continue to apply.

A consumer from Ireland placed an order on the website of a trader from the UK. Due to a glitch on trader’s website, no order number was generated after authorising the payment of €385. No email confirmation was received either and the goods ordered were not delivered. The consumer’s card, however, was charged the full amount. The consumer tried to resolve the issue by contacting the trader but the latter was unable to trace the transaction. In light of the situation, the consumer contacted ECC Ireland for assistance. The trader was subsequently contacted through the local Trading Standards office and the trader agreed to reimburse the €385 without further delay.