May 2016 eBulletin: What has the EU ever done for us consumers, and what is all this about geo-blocking?

What has the EU ever done for us? That is the question that we at ECC Ireland wanted to answer to help mark Europe Day 2016. So, this month’s eBulletin will show how consumers have benefited from some of the rights, protections, initiatives and resources that have come about as a result of EU membership.

This month also saw the European Commission announce a new e-commerce package that aims to tackle the problem of geo-blocking, bring about affordable, high quality cross-border parcel delivery, and enhance consumer protection cooperation among enforcement authorities. We welcomed these proposals as a step forward to bringing about an end to unjustified geo-blocking and deliver better outcomes for consumers.

As always, we also have the consumer query of the month which this month focuses on a consumer who had a problem renting a car because he had a driver licence issued in another EU country and wasn’t allowed to pay using a debit card.

You can download a PDF of the May 2016 eBulletin or continue on reading.

Europe Day 2016 was held on Monday May 9th and to mark the occasion ECC Ireland thought it would be a great opportunity to list just some of the benefits that consumers in the EU/EEA enjoy. To help us do this we hijacked that famous Monty Python quote and asked the question ‘what has the EU ever done for us?’ Well, the EU has done quite a lot for consumers.

Over the years, European legislation has helped improve consumer protection, welfare, rights and confidence. It has championed the fair treatment of consumers, required products to meet acceptable standards, and opened up other avenues of redress. The EU has also ensured that its citizens have access to free information and advice if things go wrong. One of these resources is the European Consumer Centre Network (ECC-Net) which by its 10th anniversary last year had assisted more than 650,000 consumers. ECC Ireland, which is part of the ECC-Net, has provided information, advice, and assistance to more than 39,488 consumers between 2005 and end of 2015 and helped secure refunds or more than €1,000,000.

This year Europe Day has taken on even more significance as there has been non-stop debates and headlines about the referendum on June 23rd on UK’s membership of the EU. With UK citizens mulling over this extremely important decision, questions are being asked about the possible implications of Brexit, implications not just for the UK but also for Ireland and the rest of the EU. It has made people wonder ‘what has the EU ever done for us’ as EU citizens, as job-seekers, as farmers, as businesspeople, as travel lovers, as environmentalists, as health and safety advocates and as consumers. The list goes on.

Check out this video (produced by This Is Distorted with help on the facts side of things from Dr Simon Sweeney of the University of York) which looks at the June 23rd referendum on UK’s membership and asks the question, ‘What has the EU ever done for us?’.

Here’s the list ECC Ireland has put together to highlight how the EU has helped made improvements for consumers, and that is just skimming the surface; it would take a number of eBulletins and a lot of reading time to get through everything the EU has accomplished in consumer affairs.

Protection of health and safety:

Protecting you on holiday and abroad:

What is Europe Day?

On May 9th 1950, five years after the Second World War, the French foreign minister at the time, Robert Schumann, gave a memorable speech making the case for a new model of political and economic cooperation for Europe. Each year, the EU institutions celebrate this by organising activities on or near May 9th, the anniversary of the Schuman Declaration. It is also an opportunity to celebrate the founding of the EU and inform the public about the day-to-day work of the institutions as well as the broader issues, the challenges and the benefits of the EU for its estimated 508 million citizens.

Robert Schuman is considered one of the fathers of Europe. In his Declaration of 9 May 1950, he proposes to place the French-German production of coal and steel under a common High Authority, within an organization open to the participation of the other European countries. The Schumann Plan led to the creation of the European Coal and Steel Community (ECSC), which is at the origin of the current European Union.

What have the Romans ever done for us?

Just in case you need reminding of ‘what the Romans have done for us?’ –  Here is that memorable scene from the brilliant Monty Python team – just for giggles. 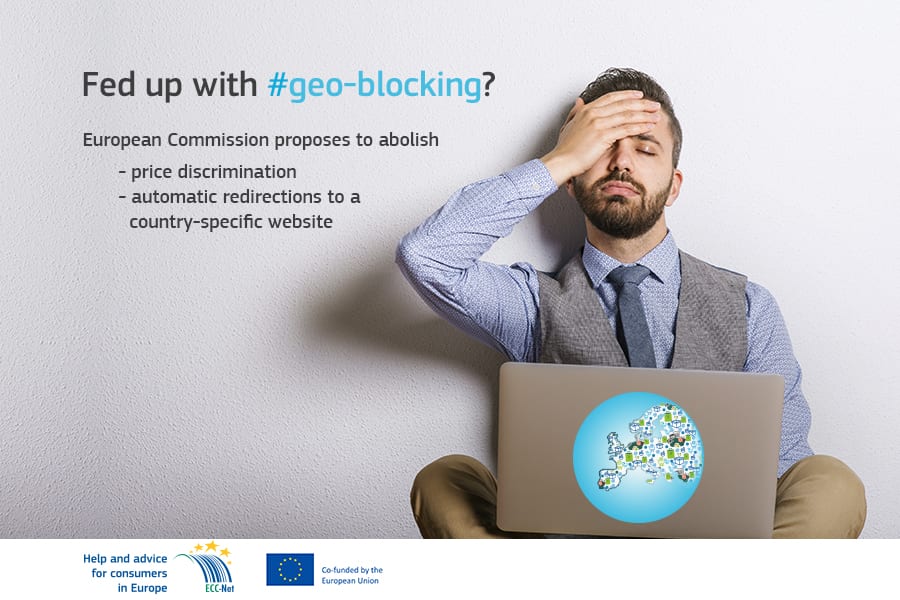 You might have seen the words e-commerce and geo-blocking mentioned quite a lot recently. Well, this is all to do with the European Commission announcing [on May 25th 2016] a new e-commerce package which is part of its strategy to establish the Digital Single Market. There has been a lot of talk about the issue of geo-blocking and ECC Ireland certainly welcomes the new proposals as a step forward in the right direction to eventually bring about an end to unjustified geo-blocking. However, it will take time before these proposals become law and have the desired effect on consumers’, and traders’ e-commerce experiences.

So what is geo-blocking and how does it affect consumers?

Geo-blocking happens when online sellers deny consumers access to their website because of their country of residence. For example, you want to buy this knock-out dress or that must-have pair of runners which is on offer or is at a good price from the UK version of a retailer’s online store but you can’t. Why? Because you have been redirected to the Irish version where the product may be priced higher or may not even be available. Geo-blocking also occurs when a consumer gets to the intended website but is prevented from accessing the product or service, or cannot continue with the payment because of his/her place of residence, where the bank account is based, or the EU country the debit/credit card was issued. There are also geo-blocking instances when traders refuse to sell to a consumer because they do not do cross-border deliveries. In short, geo-blocking is when a consumer is discriminated against on the basis of his/her country of residence when buying goods or services online.

E-commerce package and the regulation on geo-blocking:

The package is a three-pronged plan to boost e-commerce by tackling geo-blocking, making cross-border parcel delivery more affordable and efficient, and promoting customer trust through better competition and enforcement.

One of the key initiatives is the new regulation on geo-blocking which aims to enable consumers to buy goods and services, including some digital services such as cloud storage and website hosting, from any country in the EU, without being automatically re-directed by the trader to another country-specific website. Traders still remain free to set their prices in a non-discriminatory manner and the regulation does not address dynamic pricing (traders adapting offers over time) depending on a number of factors that are not linked to customers’ residence. Although traders will not be obliged to deliver goods to the consumer’s country, they will need to give consumers the option of picking up the products from a delivery point inside the trader’s country.

Traders will still be able to decide where and when they offer their goods and services to customers, for example, they can direct different offers, terms and conditions, or country-specific websites at certain Member States or groups of customers. Discrimination based on residence is prohibited where the trader sells goods that are not delivered cross-border to the Member State of the customer, in the provision of electronically supplied services (except copyrighted works and content, for example Netflix or ebooks), and where the trader provides services in a Member State different from that of the customer’s Member State (for example, hotel accommodation, car rental, entry tickets to music or sporting events, or leisure parks). When it comes to payment, traders cannot apply different payment conditions on the basis of the customers’ residence and if the payment account is based or debit/credit card is issued in another EU country. Traders affected include those based in the EU and those in other countries who sell or want to sell goods and services to customers in the EU.

For more information read our press release, an infographic, and factsheet, all of which are available on the ECC Ireland website.

Question: I made a reservation with a car rental company only to find out by chance that I’m required to pay with a credit card as I have an EU driver licence. If I had an Irish driver licence I would have been allowed to rent the car using a debit card. This was not mentioned in the terms and conditions, nor was this mentioned in the confirmation email I received. The website also gave no information about this additional requirement. To make things worse, I have actually used their services before without the need of a credit card. I feel I am being unfairly discriminated. Can they do this? What are my rights?

Taking this into account, we advise you to contact the car rental company (in writing/by email) stating this legislation, the difference in requirements between EU and Irish driver licences, in particular, the fact that only holders of Irish driving licences are allowed to rent a car with a debit card is a discrimination based on the place of residence and nationality.