Got questions about the new Package Travel Directive? We’ve got answers

You may have heard about a not-so-little thing called the Package Travel Directive? This new EU Directive essentially updates the previous one thereby providing even more benefits for consumers who like to book package holidays, either pre-arranged or customised, and it also covers linked travel arrangements.

However, there’s still a lot to get your head around, particularly in relation to linked travel arrangements – like, what the heck does that even mean right? While trying to figure that one out, you probably also want to know exactly what new benefits or rights this EU Directive gives you when booking that next package holiday? Well, we’ve put together some basic questions and answers to help shed some light on this.

This month’s consumer success story tells how ECC helped an Irish consumer get reimbursement of more than €700 for hotel accommodation that was far from what was described. The consumer query of the month explains how it may not always be possible to get a refund for hotel accomodation (that’s not part of a package) when you’re unable to use it. 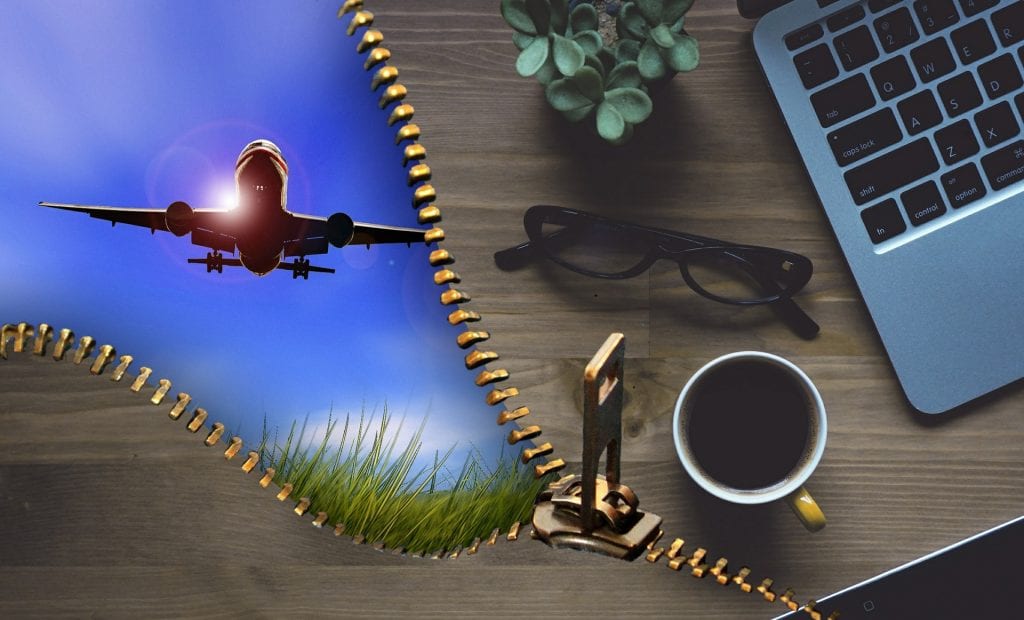 Q1: What exactly is the new Package Travel Directive?

Well, without getting too heavy, the new bit is the Directive (EU) 2015/2302 on Package Travel and Linked Travel Arrangements – it just flows off the tongue, doesn’t it? This extends the protections previously provided by the 1990 EU Package Travel Directive, which was implemented in Ireland via the Package Holidays and Travel Trade Act 1995, to reflect the modern travel market.

Q2: How did this happen and why?

Due to the dramatic evolvement of the travel market in recent years (online travel agencies, comparative rates websites, niche tour operators, and customised travel arrangements), the European Commission saw a need to update and amend the existing Directive. Draft law was then voted on and agreed by the European Parliament in early 2014 before talks with Member States on the final wording of the directive. In May 2015, the European Council confirmed a political agreement on the reform of the Travel Package Directive. The Directive then entered into force on 31 December 2015 and became applicable EU-wide from 1st July 2018.

Q3: How does it help consumers?

It helps consumers quite a lot if you like a bit of flexibility when booking different elements of a holiday, particularly online. The new Directive represents a move away from the more traditional pre-arranged travel package. It aims to bring trading standards and consumer protection in line with the changing market. According to the European Commission, an estimated 120 million consumers book other forms of combined travel each year and the new Directive will reduce consumer detriment costs by €430 million per annum across the EU.

Q4: What types of holiday bookings are covered under the Directive?

Traditional pre-arranged packages – These are ‘ready-made’ holidays made up of at least two of the following:

Customised/dynamic packages – In this type of package, it is the consumer who selects the components of the holiday, therefore, it is not-prearranged. The booking must be purchased from a single point of sale, either online or offline, and all the components must relate to the same trip or holiday.

The new Directive focuses on the features/characteristics of a holiday booking to assess whether the arrangement constitutes a ‘package’. Therefore, the customised/dynamic package must comprise: 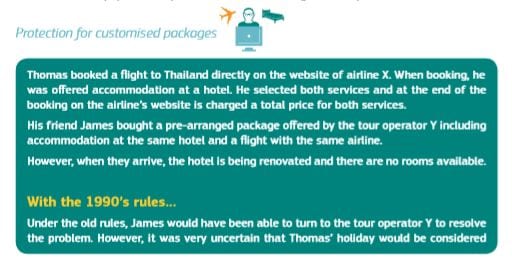 This is a completely new category which, although not considered a package, now has some protections under the new Directive; in situations where the provider of the first service goes bankrupt by providing a money-back guarantee and, where appropriate, repatriation. According to the Directive, a linked travel arrangement means at least two different types of travel services purchased for the same trip or holiday, not constituting a package, resulting in the conclusion of separate contracts with the individual travel service providers.

It is a linked travel arrangement if:

When the second booking is made: 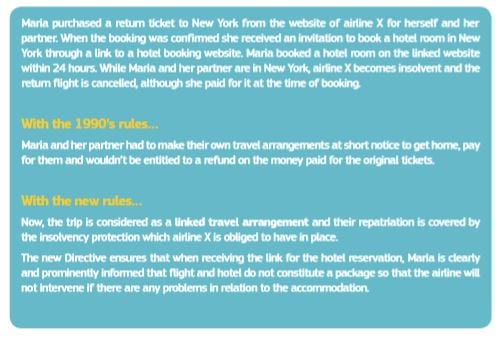 Q5: Has the new Directive provided any other benefits for consumers?

It sure has. The Directive provides for additional and reinforced rights for travellers, including supply of information, stronger cancellation rights, and financial guarantees. The benefits include:

Q6: Are there any circumstances where my holiday wouldn’t be covered by the Directive?

There are some exceptions. This includes:

An Irish consumer booked hoilday accommodation through a third-party marketplace website. However, the accommodation was not as described on the trader’s website; the consumer said it was filthy and unsafe, there was no hot water and there was also a construction site nearby. He complained on site to the hotel owner but nothing was done and so, the consumer contacted the third party trader and was subsequently moved to different accommodation for the rest of his stay. On behalf of the hotel owner, the trader offered reimbursement of €743, however the consumer encountered significant problems getting this payment and the trader eventually stopped responding. ECC Ireland sought the assistance of colleagues at ECC Netherlands who liaised on the consumer’s behalf and the trader provided a full refund.

Q: I booked two rooms for two nights for a trip to London. Unfortunately, the Beast from the East snowstorm meant that our flight was cancelled. As a result, I was not able to use the hotel rooms. I contacted the hotel, but they refused to refund me threatening that a cancellation fee would be charged. I understand that the rate I had booked the rooms was on a ‘no change, no cancellation’ basis but I had not changed nor cancelled, it was because of the storms! It was impossible for us to use the rooms through no fault of our own. I booked through a third-party site who tell me that a refund would be entirely up to the discretion of the hotel. Is this right?

A:  Unfortunately, if your trip was not part of a package but consisted of separate arrangements, and the rate applicable to the room was non-refundable, you may not be able to obtain a refund in this instance, irrespective of the circumstances that led to the cancellation, no-show, etc. Therefore, unless the hotel is willing, at their sole discretion, to accommodate your request or offer some other gesture, it may not be possible for you to secure redress on this occasion. Alternatively, if you took out travel insurance covering this eventuality, you could consider making a claim to your insurer. Although consumers enjoy a number of protections under legislation dealing with cancellations concerning passenger transport and package holidays, there is no sector-specific legislation laying down such entitlements in the case of hotel accommodation booked independently. Such cases are simply governed by the terms and conditions applicable to the reservation, and other general legislation in the field of consumer law.

This ebulletin was funded by the European Union’s Consumer Programme (2014-2020).

The content of this ebulletin represents the views of the author only and it is his/her sole responsibility; it cannot be considered to reflect the views of the European Commission and/or the Consumers, Health, Agriculture, and Food Executive Agency (CHAFEA) or any other body of the European Union. The European Commission and the Agency do not accept any responsibility for use that may be made of the information it contains.