Did you go a liittle mad during Black Friday and Cyber Monday and are now wondering what happens if there is something wrong with that wonderful bargain? Maybe you’ve yet to get on the Christmas shopping roller coaster and you are a little uncertain about your consumer rights? Well, you’re not the only one.

A survey conducted by the ECC Ireland team in September found that 73% of Irish consumers surveyed had bought a good or a service online in the past year, however just under half said that they did not feel confident about their consumer rights. It also found that of the online purchases made, the majority of them were cross-border with 60% of them from British traders. Around 57% of survey respondents said that they were planning to do their Christmas shopping online this year. There were also interesting results in relation to shopping cross-border in person with the majority of respondents having travelled to Northern Ireland for a shopping trip. The Irish consumers in this survey were also much more confident about their consumer rights (86.33%) when shopping in person in a shop on the high street.

Download your free November ebulletin PDF here or alternatively read on to find out more! 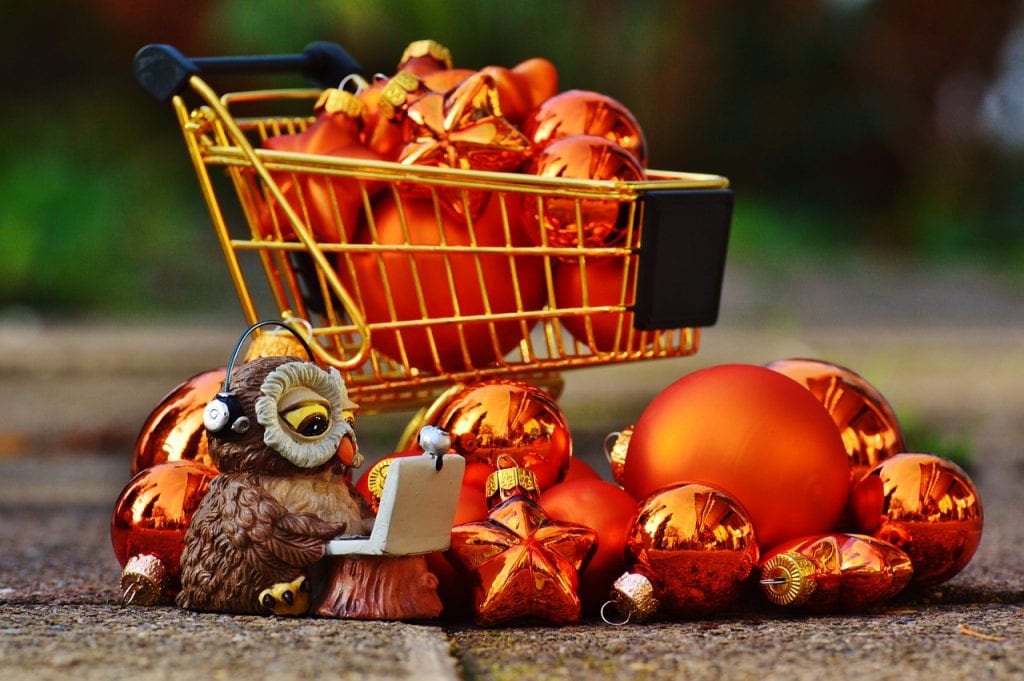 ECC Ireland consumer rights survey reveals if Irish consumers like to shop online or cross-border in person, and how confident they are

Armed to the teeth with survey forms, shiny promo pens to lure people in, and of course our winning personalities (it’s true), the ECC Ireland ventured forth into the muddy fields of the National Ploughing Championships to collect some data about consumers’ shopping behaviour. Throughout the three days we collected information from consumers who had travelled from around the country to attend the three day outdoor farming event.

What we discovered is that Irish consumers are shopping online more and more and that they are gaining more confidence buying from traders based elsewhere within the EU too, and further afield. However, the results also revealed that consumers still need to gain more knowledge about their consumer rights when shopping online and the confidence to know what to do if things go wrong. The survey showed how Irish consumers travel cross-border to shop, particular to Northern Ireland, and that they have far more confidence about their rights when buying in person in a shop.

There were a total of 316 respondents to this survey. However, for the purposes of the following breakdown of results we will just be focusing on the 285 respondents who are resident in the Republic of Ireland.

How many bought a consumer good or service online in the last 12 months?

Out of the 285 total survey respondents to this question, an impressive 210 or 73.68% bought some sort of consumer good or service online in the past 12 months. 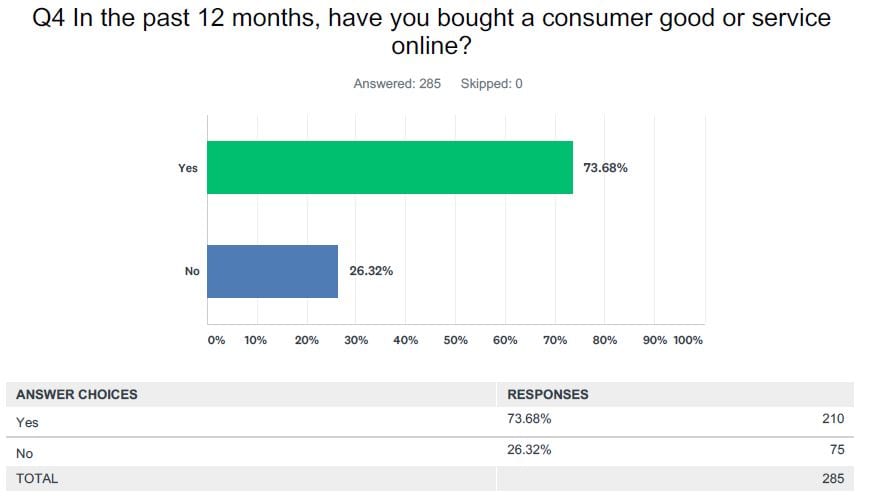 Where was the online trader based?

Looking at the number of purchases made by the 210 respondents who shopped online in the past year it is clear that cross-border shopping is quite popular. 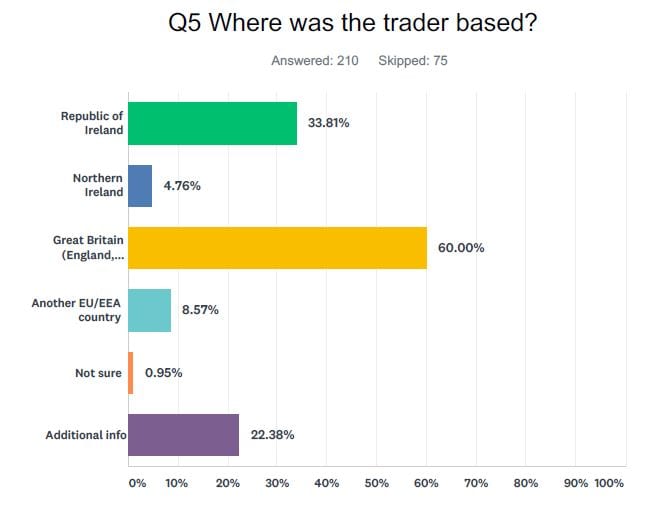 Did the consumer experience a problem with their online purchase?

Of the 208 respondents who answered this question, 67.31% experienced no problem which is great. However, if we look at the remaining 68 respondents and their answers we can get a picture of the type of issues that they encountered after buying their online purchase.

The top 10 issues experienced by these consumers were (in descending order):

Some of the comments made by consumers about the problems experienced were interesting in that they revealed a particular problem with delivery to rural locations in Ireland. At least 5 consumers said that the trader would/could not deliver to a rural area. Other comments showed that sometimes consumers ended up paying more than they originally thought with one consumer having to pay customs charges while another got the same product twice but also got charged twice for the privilege. Another received a dress that was the wrong colour and was damaged but she couldn’t get her money back due to the fact that the trader was based in China and EU consumer legislation did not apply.

When asked if they did anything to resolve the problem, 56 out of the 68 who experienced a problem gave answers which showed that:

Do you feel confident about your consumer rights when shopping online?

This was one of the most important questions in the survey and it was asked of all respondents, whether they shop online or not. Of the 285 repondents, 55.79% (159) said that they feel confident about their consumer rights when shopping online while 44.21% (126) said they didn’t feel confident. It seems like a positive result at first but there is isn’t that much difference between those who feel confident and those who do not which indicates that there’s a bit more work to be done to increase the numbers on the ‘feeling confident’ side.

Some of the main reasons given for why respondents didn’t feel confident about their online consumer rights include:

How likely are you to shop online for Black Friday/Cyber Monday, Christmas shopping, and January Sales?

When asked this question, the results from 283 respondents showed that consumers were more likely to consider shopping online for events like Christmas Shopping with January Sales being second most popular followed by Black Friday/Cyber Monday. 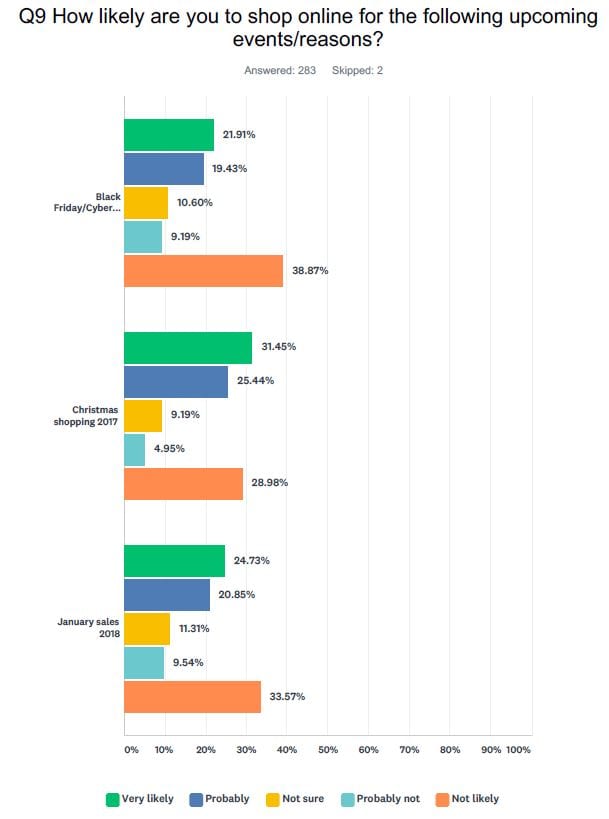 Have you travelled cross-border for the purposes of shopping and where was the trader based?

Out of the 285 respondents to this question, 38.60% said yes while 61.40% said they had not. When asked where they went on their cross-border shopping trip, the results show that trips to Northern Ireland were the most popular at 55.45% of all purchases made (Belfast and Derry are equally the most popular, followed by Newry and in joint last place was Lisburn and Enniskillen). Britain (mostly England) was the second most popular destination with 30.91% of all purchases made there. Other popular shopping destinations included Spain, Portugal, France, and the USA.

ECC Ireland also asked respondents what their reason was for the cross-border shopping trip. Those that liked to shop in Northern Ireland did so because: it was cheaper (51.67%), for the shopping experience (31.67%), there was more choice (28.33%), for Christmas Shopping (16.67%), Other reasons such as a holiday (15%), January sales (10%), Black Friday/Cyber Monday (3.33%), and the purchase of a new/second-hand car (3.33%). The reasons for shopping cross-border in Britain followed in pretty much the same order except for the purchase of a new/second-hand car which moved up into 5th place with 8.33% which is in keeping with the trend of Irish consumers travelling to the UK to buy a new or second-hand vehicle.

Do you feel confident about your consumer rights when shopping in person in a shop/business premises?

It was very clear from the survey results that Irish consumers feel much more confident about their consumer rights when they are shopping in person on the high street. Of the 278 who answered the question, 86.33% said they were confident while 13.67% said they were not. 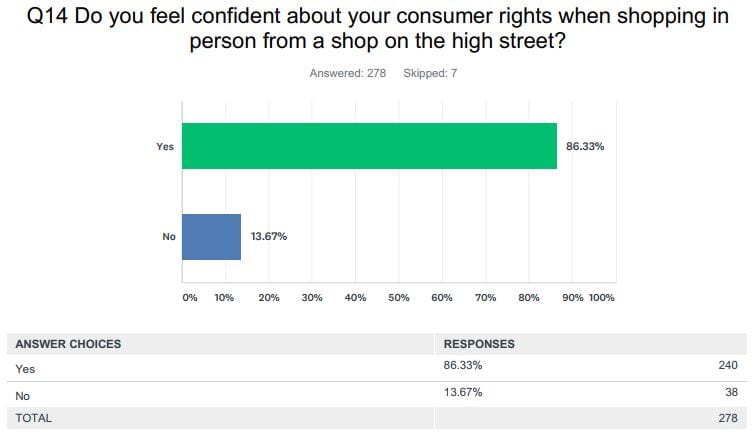 Some of the reasons given for this extra confidence includes:

How likely are you to go on a cross-border shopping trip for Black Friday/Cyber Monday, Christmas shopping, and January Sales, and where would you go?

A total of 279 respondents answered this question, the results of which you can see in the image below:

Information about your consumer rights

If you want to know more tips to help you learn more about your consumer rights then check out the following links:

A consumer bought a new Sony Experia z5 from a French online trader for €422.40 and was charged for this on 6th February. On the trader’s website it stated that delivery would take just 5 to 6 working days. However, by 13th February the consumer still had not received the phone and so she decided to cancel the order. The terms and conditions on the trader’s website stated that the consumer could cancel within 14 days of making the order but when the consumer tried to cancel the contract, the website was not working properly and the customer service department was not answering her emails or Facebook messages. ECC Ireland forwarded the case to colleagues in ECC France who informed the trader of the consumer’s right to the 14 day cooling off period as well as rights in relation to when the trader fails to deliver an item within an agreed time period. The trader then refunded the consumer in full.

Q: I ordered two custom-made dresses from a UK website. However, when I tried them on, I realised that the first dress did not fit the measurements I provided and the second dress was very poor quality and actually fell apart while I was trying it on. As I was satisfied with the quality of the first dress I had alterations made to it but I wanted to return the second dress and get a refund for it. When I asked the trader for the return address, I didn’t get good response, in fact, they tried to discourage me by saying I had to pay high postage and tax and that the dress would most likely go missing after I return it and that they couldn’t be held responsible for that. They then refused to supply me with an address and said I could just keep the dress and get a 5% refund of the purchase price. What can I do?

A: When you’re shopping online from a trader based within the EU/EEA consumers generally have a right to a ‘cooling-off’ period of 14 calendar days where you can withdraw from the contract and return the purchase to the seller. However, there are exceptions to this. As both of the dresses you ordered were custom-made the right of withdrawal does not apply.

There is a remedy that may be available to you if it can be proven that the dresses did not comply with the contract. Under the Sale of Goods and Associated Guarantees Directive 99/44/EC, a consumer good should comply with the description given by the seller and possess the qualities of the product shown to the consumer as a sample or model, be fit for purpose for which a good of the same type are normally used, and show the quality and performance which are normal in goods of the same type and which the consumer can reasonably expect. However, as the first dress has been altered it would be difficult to now prove that it was not as expected. In relation to the second dress, it may be possible for you to request a partial refund from the trader on the basis that a consumer can reasonably expect that the dress would be of better quality than the pictures and description of the dress of the website.