New figures published by the European Commission has shown that there were more than 2,000 dangerous product EU-wide alerts in 2015 with toys and clothing causing the most concern. 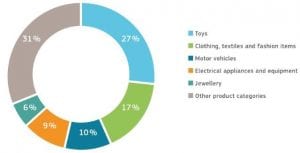 The 2015 figures, published on April 25th 2016, showed that there were 2,072 alerts and 2,745 follow-up actions registered in the the Rapid Alert System. Toys (27 per cent) and clothing, textiles, and fashion items (17 per cent) were the two main product categories for which corrective measures had to be taken. These were also the most notified in products in 2014.

According to the report, the most frequently notified risk in 2015 was chemical risk (25 per cent), followed by risk of injuries (22 per cent). The most frequent chemical risk notified in 2015 related to products such as fashion jewellery, with harmful heavy metals like nickel and lead, and toys containing phthalates (plastic softeners which can cause fertility problems).

It was also found that 62 per cent of the notified dangerous products came from China and so this country remains the number one country of origin in the alert system.

Commenting on the figures, EU Commissioner for Justice, Consumers, and Gender Equality, Věra Jourová said: “The Rapid Alert system has helped coordinate quick reactions between consumer protection authorities to remove dangerous products across Europe. Two challenges lie ahead of us: online sales bringing products directly to consumer’s houses through mail and the strong presence of Chinese products signalled through the Rapid Alert system. I’m going to China in June to further step up our important cooperation with the Chinese authorities on product safety.”

what is the Rapid Alert System?

Since 2003, the Rapid Alert System ensures that information about dangerous non-food products withdrawn from the market and/or recalled anywhere in Europe is quickly circulated between Member States and the European Commission. This ensures that appropriate follow-up action (ban/stop of sales, withdrawal, recall, or import rejection by Customs authorities) can be taken everywhere in the EU.

Watch this Rapid Alert System video from the European Commission to find out more:

You can also find more information about the Rapid Alert System Report 2015 on the European Commission’s website.

ECC Ireland also has advice about buying goods and services and shopping online including information on what to do if things go wrong.